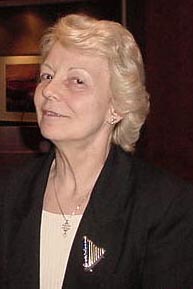 Lanalee de Kant Montgomery (née Litz) grew up near Syracuse and attended the Eastman School of Music in Rochester, NY. For many years she served as principal harpist of the New Orleans Symphony Orchestra and of the Vancouver Symphony Orchestra, playing under the batons of some of the greatest conductors and composers of the era (Pierre Monteux, Ralph Vaughan Williams, et al.). Her talents were not limited to classical orchestra work; some years ago, she was chosen by Ringo Starr to accompany his musical Christmas card!

Her final years were spent in England and in France. She is remembered fondly by her students; Alison Hunter, who studied with Lanalee at the University of British Columbia during the late 1970s, writes: “Lanalee was very much a force of nature. She had high expectations of her students and was incredibly supportive. She always encouraged us in many ways. I remember preparing for a performance and, after ensuring that I was ready music-wise, she then asked me what I was planning to wear and offered to lend me one of her outfits. Between her orchestra and teaching schedules, she was very busy but she was an accomplished seamstress and sewed her own “harping outfits.” Keep in mind that it was the late 1970s—clothing was often very eclectic and different and Lanalee had great flair and stage presence. I sometimes come across music with her fingerings and markings on it and I remember what a great and much-valued teacher she was.”