The winner of the American Harp Society competition Young Professional division also serves as the AHS Concert Artist, receiving the opportunity and financial support to perform chapter recitals for a two year term.  $3000.00 is available per year, along with funds from the Escosa Memorial Fund.

The Chairman will contact the Concert Artist, who will then set a date with the local chapter.  The expenses of the concert must be approved in advance by the Chairman and the AHS Bookkeeper before the concert date is finalized, and all publicity involving the concert must acknowledge the American Harp Society. Winner of the 2019 Young Professional Division of the American Harp Society National Competition, Caroline Wilkins is the 2019-2021 Concert Artist. Caroline holds the Master of Music and Bachelor of Music degrees in harp performance from the University of Southern California Thornton School of Music where she studied with JoAnn Turovsky. Caroline has played principal harp with the American Youth Symphony, the Debut Chamber Orchestra, and the USC Symphony and has been a substitute for the New World Symphony. Wilkins began studying piano at the age of five and the harp at seven. She maintains a robust private teaching studio in both piano and harp, has presented masterclasses for the Los Angeles chapter of the American Harp Society, and is looking forward to working with students around the country as a part of her role as AHS Concert Artist. 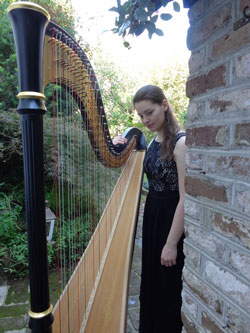 Abigail Kent is a versatile musician who has performed internationally in venues such as Carnegie Hall, The Kimmel Center, and the Mozarteum in Salzburg. Among her many awards, she was Finalist at the 2016 International Harp Competition (Hungary), Laureate Finalist and Senior Division Winner of the 2015 American Strings Teachers Association National Solo Competition, Semi- Finalist in the Chief Musician category of the 3rd Wales International Harp Competition in 2014, and Winner of “Play With the Pros” Concerto Competition and performance with members of the Philadelphia Orchestra at the 2013 Saratoga Harp Colony.

Most recently, Ms. Kent was awarded 1st Prize in the 2017 American Harp Society’s Competition, Young Professional Division, earning her the title of “AHS Concert Artist” for 2017-2019. As Concert Artist, Abigail will be presenting recitals and masterclasses throughout the US and Canada. Additionally, Abigail was a featured harp soloist for the 2017 World Harp Congress in Hong Kong.

As an orchestral harpist, she is Principal Harpist of Symphony in C and is Guest Musician Harpist for the Charleston Symphony Orchestra and the New World Symphony. She has performed under the batons of Michael Tilson Thomas, Yannick Nézet-Séguin, Osmo Vänskä, Vladimir Jurowski, and Ken Lam. An avid proponent of new music, she has commissioned and premiered multiple works for harp solo and chamber, including dahlianum by Andrew Hsu, The Star at Night by Ben Yee-Paulson, and Tolstoy Trio by Nicholas Bentz.

Miss Kent studied for a year at the Royal Academy of Music in London, and then was selected as the Maryjane Mayhew Barton Fellow at the Curtis Institute of Music in Philadelphia where she graduated with the Landis Award for Excellence in Academics. In the fall, she will pursue her Masters of Music degree at the Mannes School of Music, studying under Emmanuel Ceysson, Principal Harpist of the Metropolitan Opera Orchestra.