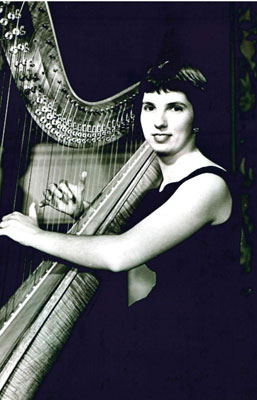 Ruth Olivia Wickersham Papalia, age 84, of Monona, WI, died peacefully on Tuesday October 8, 2019 at Aster Retirement Community Home in Cottage Grove under the care of Agrace HospiceCare. She lived 6 years with Parkinson's Disease without complaint. Ruth and her husband Anthony resided in Cortland, NY from 1962 to 2013.

Ruth was born February 5, 1935 in Quakertown, PA. Her parents were W. Clifford Wickersham and Fannie Clymer Wickersham. Ruth had an older sister, Esther, from whom she borrowed her first harp. Ruth began harp lessons when she was 9 years old. At 17, she entered Oberlin Conservatory of Music, in Ohio, majoring in harp performance under Lucy Lewis. During her college years she studied with Carlos Salzedo at the Summer Harp Colony of America in Camden, Maine. Also, during her college years, she met her husband to be, Anthony Papalia.

In the 1950's, Ruth toured the United States and Canada as a member of Columbia Artists' "The Angelaires," a Community Concert quintet of professional harpists. Ruth was co-founder of the Central New York Chapter of the American Harp Society (AHS). 1979 began her involvement at the national level: she served as AHS Secretary, AHS Treasurer and Chairman of the Board of Directors. In 2004, Ruth, Lucy Scandrett and Jan Bishop formed a trio named "The Three of Harps" which commissioned two pieces from the British composer Simon Proctor. The trio performed over 20 concerts together. Ruth also performed for over 40 years with the College Community Orchestra at State University of NY at Cortland. In 2008 Ruth received the prestigious Lifetime Achievement Award, given to honor extraordinary service to The American Harp Society, Inc. and the harp.

Her family remembers her fondness for picnics, eating on the patio and family vacations. She threw marvelous birthday parties and hosted many dinner parties. Mom had a quick wit and a gracious manor. She supported her daughters in many pursuits: Lamont Circle softball, drama, 4-H, Girl Scouts, religious education, Soap Box Derby, concert band, etc. As a wife, Ruth was a good role model for her children. She moved the young family several times so Tony could complete his doctorate. She and Tony both had the knack of turning everyday times into "adventures".