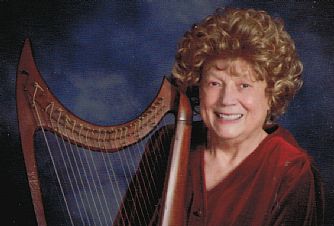 Marjorie Zaerr Tayloe, age 87, of Dubuque, IA and formerly of Solvang & North Hollywood, California, passed away peacefully, on Sunday, April 2, 2017, surrounded by members of her family. To honor Marjorie’s life, private family services were held prior to her interment at Forest Lawn Hollywood Hills.

Marjorie Zaerr Tayloe didn’t harp on it, but she made outstanding cultural contributions throughout her lifetime. She had plucked harp strings and sung in 21 countries, 48 states, before five U.S. presidents, the Queen of England, the Queen of Denmark, the President of Paraguay, celebrities and other heads of state. Like the early mistrals who roamed the countryside, Marjorie followed their pursuit, traveling extensively with her harps. She had performed with the BBC, the International Eisteddfod of Wales at Llangallon, and many summers at the Hollywood Bowl in California. Marjorie played for more than 1100 weddings. For thirteen years every Monday night, Marjorie played the great Kimball Pipe Organ for a Los Angeles radio station. Winning voice scholarships from the Liverette Opera Academy gave Marjorie an incentive to coach many promising musicians to win scholarships, prizes and lead successful lives.

The Tayloe Family of seven (all natives of Southern California) Mary Ellen, David Chester, triplets Sarah Lee, Susan Marie and John Danny, Mom and Dad sang, played harps and rang Old English Hand Bells that brought musical joy to audiences for 15 years. The family presented over 700 performances and traveled in a motor home all over the U.S., the British Isles and Europe. When the children were infants, in order for Marjorie to keep up her harp practice, she would carefully move a harp into the nursery and played through her practice routine. One by one the children would drop off to sleep.

Being an invited guest on numerous television programs, being interviewed by newspapers and magazines were part of her routine. Once in a while you would find her playing with a symphony orchestra. She is listed in the International and American Who’s Who, 2000 Musicians of the World. She was a longstanding member of both the American Pen Women and the D.A.R..

Marjorie had a passion for music and a gift for passing it on. She believed the love of music is caught as well as taught, for good music enriches our lives, controls stress, and she was always harping about God’s love.

Marjorie was preceded in death by her loving and faithful husband, Ralph Chester Tayloe, and her parents.

Online condolences may be left for the family at CelebrateLifeIowa.com