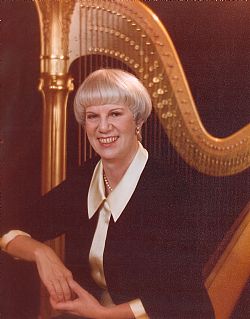 Catherine Gotthoffer passed away on December 29, 2014. She was a founding member of the American Harp Society - L.A. Chapter, a two term National President of the AHS, Inc., and its first Lifetime Achievement Award Winner. Her career began with the Dallas Symphony Orchestra then she moved to Los Angeles to work under contract with MGM. She participated in the scoring of over 2,000 motion pictures, played for television dramatic series, and performed for Academy Award and Grammy presentations. She also served as an officer for the World Harp Congress and for her local American Federation of Musicians Union. Her obituary and a memorial guest book may be found here: