The Georgia Chapter celebrated their 40th year with a celebratory concert in September of 2018. With almost 50 harpists performing it was truly a magnificent evening of music. The concert took place in the beautiful sanctuary of Peachtree Road United Methodist Church in Atlanta. 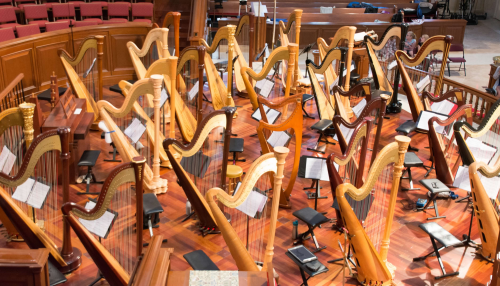 40 YEARS - A HARP ODYSSEY included performances by The Middle Georgia Harp Ensemble, led by Calista Koch, and the Urban Youth Harp Ensemble led by Angelica Hairston and Molly O’Roark. One of the biggest highlights was the performance of Whirlwind by Atlanta Symphony Orchestra’s Principal Harpist, Elisabeth Remy Johnson. She also performed an arrangement of orchestral excerpts which she masterfully melded into a montage that included 4 harpists playing the orchestral parts. The evening was hosted by Dr. Mel Foster and opened with a rousing rendition of Also Sprach Zarathustra. It was arranged by chapter member Julie Koenig and featured not only the entire ensemble but the sanctuary’s incredible organ played by Nicole Marane. The concert was conducted by Rhett Barnwell and Ellen Heinicke Foster. The chapter recognized the founding members of the chapter and presented each of them with a rose. This concert took months to plan and prepare and would not have been possible without the hard work and dedication of Rhett Barnwell, Ellen Heinicke Foster, Julie Koenig, Molly O’Roark and

In the Spring, the chapter hosted the annual AHS Auditions and Evaluations. This truly was a great way to “Celebrate our Legacy”. In October, the chapter had a meeting which we called Harp-o-ween. We had a blast with Molly O’Roark who treated us to some interesting sounds on her Delta. This has become an annual event for the chapter.

Our chapter ‘Inspired Excellence” throughout the entire year by encouraging members to volunteer for performances around the community. These performances included, the Harp Odyssey, Adult Harp Salon, Atlanta Harp Sound and the North Atlanta Harp Ensemble. The chapter also offered assistance to composers and arrangers in understanding and writing effectively for the harp. Two members of the Georgia Chapter, Eleni Witte and Annalyn Waddy , were chosen for the AHS Summer Institute’s Young Composer’s Project.

The Georgia chapter prides itself in “empowering the next generation of harpists” and this year was no exception. The chapter has a close working relationship with Drew Charter School’s Urban Youth Harp Ensemble who was featured not only at the Harp Odyssey concert but also at the Southern Harp Festival. The school was also used as a primary rehearsal space for the 40th Anniversary concert. Every year, we offer the AHS Auditions and Evaluations and this year was no exception. We had 11 students participate and the Evaluator was Maggie Lovell.

This year, we chose 3 students to represent the chapter as Chapter Ambassadors at AHS Camp Innovation: Madeline Chen, Erin Howard and Eleni Witte. The students were given a scholarship to attend the camp and at the chapter meeting the following Fall they all performed and gave us accounts of what they learned at camp. They also put together a program that they performed for the Ronald McDonald House in Atlanta.

It was a terrific year to be part of the Georgia Chapter and we are proud of all the contributions our members have given to the Georgia community at large. 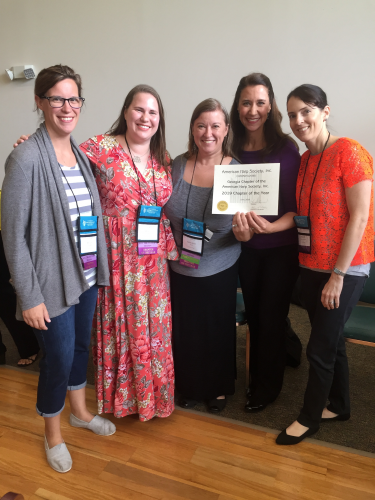